The business of grace 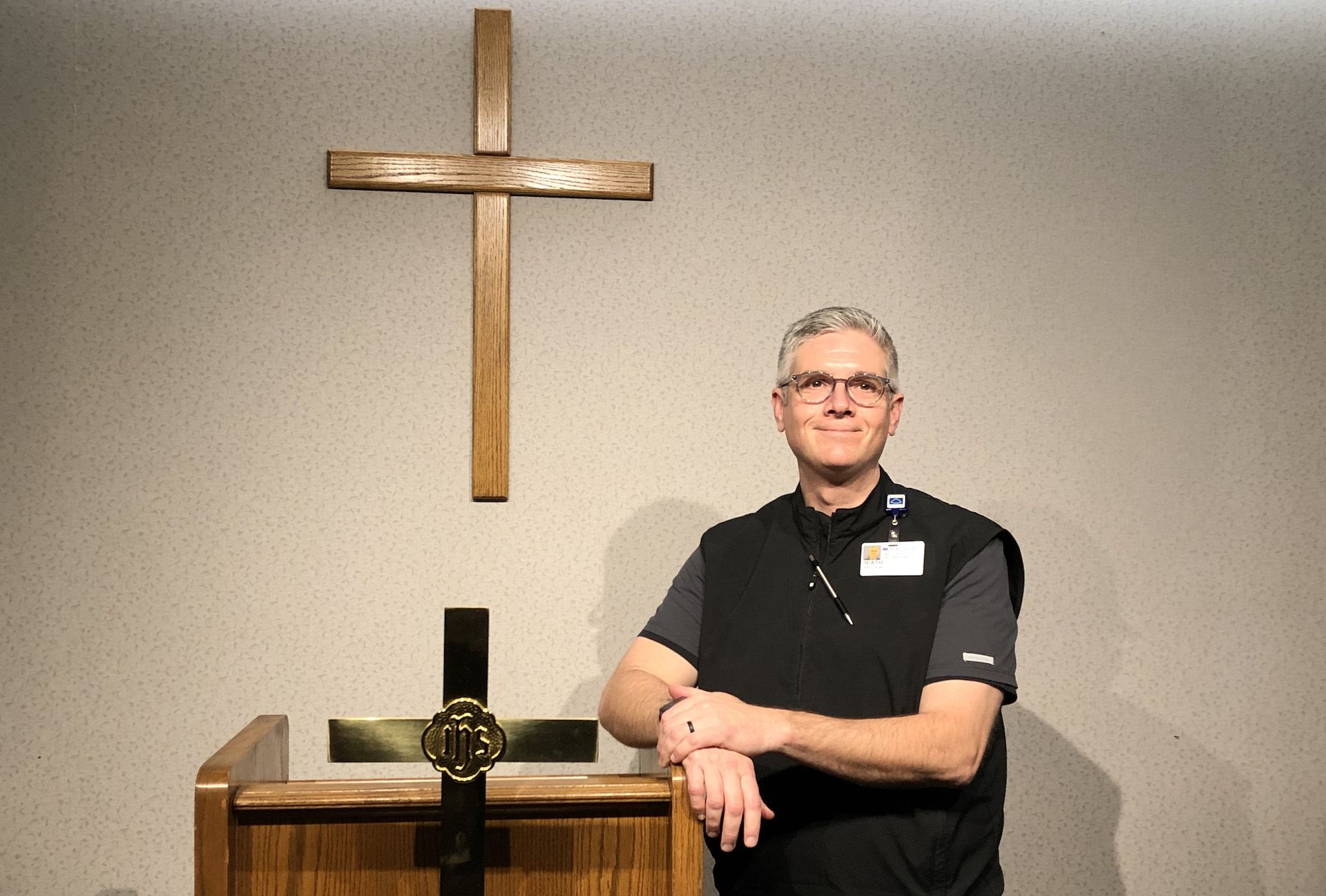 Heath Ferguson is in the business of offering grace.

Because grace is what helped him change his life.

Ferguson serves as the Chaplain and Director of Pastoral Care and Faith Relations at Mississippi Baptist Medical Center. To look at Ferguson one might not see the former drug addict who found himself crossing the border into Northern Mexico just to get his next hit, but that’s exactly who he used to be.

Growing up in Southwest Mississippi, Ferguson’s father left the family home when he was a young boy. Soon after, Ferguson’s mother re-married and that’s when the abuse began.

“I was dealing with the trauma of emotional and sexual abuse,” he said. “That’s when I started using. I was drunk at age 11.”

The marriage didn’t last, but Ferguson was left broken.

Ferguson was using alcohol to cope.

Ferguson spent the next 20 years of his life using drugs and alcohol and struggling with relationships.

“I wound up addicted to many things, and when I wasn’t getting enough drugs prescribed to me, I would go to Northern Mexico to the farmacias to buy pills and bring them back home.

“It was common knowledge that you could go down there and buy pills for a few cents.  You could buy hundreds or thousands of them at a time. I’d buy them and walk back across the walking bridge across the Rio Grande. You don’t declare anything. They check your ID when you cross back, and you get in your car and drive home. It was a dark and dangerous place.”

As he drove home from one of those excursions, Ferguson was seriously injured in a car accident.

“I’m very lucky to be alive,” he said. “When you’re taking the pills, it’s like Christmas. You cross the border and you have all the pills and immediately start taking them. I had a bad wreck on my way home.”

Ferguson was injured on one side and required 82 stitches. Today, he still has the scar that serves as a reminder of those dark times.

Returning from one of his trips across the border, Ferguson was arrested in Brookhaven. He was looking at 19 years in prison for possession with the intent to distribute.

“I was fortunate enough to have been arrested in an area that had a really good drug court,” he said.

He was sentenced to drug court – a sentence that changed his life.

“It is by the grace of God that I get to be here today. I know how close I was to death. I know how I should be in prison.”

Ferguson spent the next weeks and months focused on recovery.

“The drug court program is very rigorous and very difficult,” he said. “It works, but it’s tough. It’s full of grace, full of mercy, and full of the right consequences.

“Drug court is a humbling experience.”

Ferguson referred to it as embarrassing at times.

“You go to the courthouse every Monday and sit there with all the other participants in that area. You wait until it’s your turn and you go up and talk to the judge.”

As a participant, Ferguson was required to participate in meetings and get a job – things of which he had to provide proof.

“Each day, every day while you’re in drug court you have to make a phone call at 5 p.m. to find out if you have to get tested that day. That’s life every day.”

“He’s a good, Godly man who understands it takes the right mix of consequences and grace to get people like me clean and sober and ready to take on a new life free from addiction.”

As Ferguson worked toward recovery, he also began paying off his fines.

It was a tough time in his life.

“There were days when I was so broke that I would be at the gas pump thinking, ‘How much gas will it take for me to get to the drug test and then back to work because I’ve got to pay my fines and fees to stay in drug court?’ I remember breaking down into tears because it was so overwhelming.

“Through all of it I became someone more responsible and trustworthy.”

A year into his recovery, Ferguson was given the opportunity to care for his dying grandfather.

“He showed me unconditional love at the right place at the right time in my life,” he said. “It helped me believe in a deeper transformational love, and my life has not been the same since.”

Nearly two years after the death of his grandfather, Ferguson answered the call into the ministry.

He attended New Orleans Baptist Theological Seminary and then the chaplaincy program at Baptist Medical Center. He has served at the hospital as the Chaplain for the last 10 years.

“I’ve always been called into crisis situations,” he said. “I go into the dark places because I know what it’s like to live in those places.”

Today, Ferguson is celebrating 15 years clean and sober (as of March 17, 2021) and enjoys time with his wife and two sons.

The light for Ferguson was finding unconditional love through his faith in Jesus Christ and through the redemption he found in drug court.

“I would still be in that dark place if I had gone to jail for 19 years,” he said. “Addiction is a complicated issue, and we have to build a robust drug court program and supply its needs in order to help break the chains.

“There needs to be a new lane for drug addiction that is not just the penitentiary. Addiction is multi-faceted and those who struggle with it need structure, rigor, and compassion.

“We’ve seen the brokenness of the old way.”