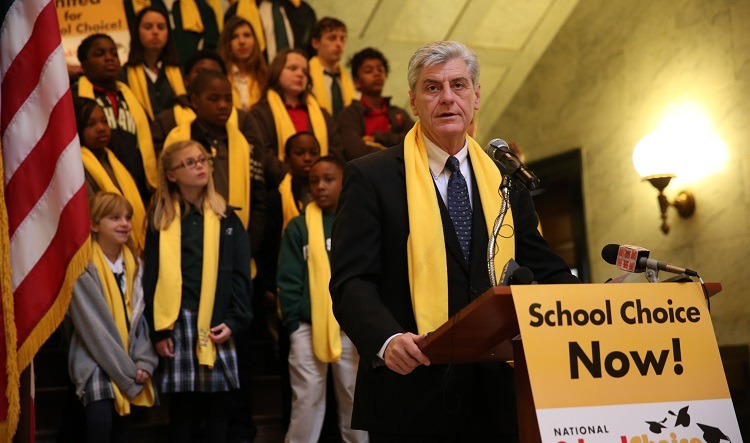 “Perhaps the most critical decision parents will make for their children is where to send them to school. And parents are the one most qualified to make that choice – not bureaucrats,” Gov. Bryant said.

“School choice empowers parents to choose a school they feel best meets their child’s needs. That empowerment should not be limited to those with means. Every parent, regardless of ZIP code or income, deserves educational options for their children. Next session, I will support a proposal to expand school choice.”

His budget also recommended $13 million for the Education Scholarship Account (ESA) program. In 2015, Mississippi became the third state in the nation to approve an ESA, an innovative approach to school choice that gives families the ability to customize their child’s education.

The program, which was initially funded at $3 million, has been level-funded for the past two legislative sessions capping the number of available seats at around 430.

Gov. Bryant, who has been a longtime proponent of school choice, made similar comments at the Neshoba County Fair this past July.

During his speech, Gov. Bryant said he wanted to see more school choice options for families.

“We’re going to have more school choice so you can take your child and your tax dollars and send them to a school of your choice,” Gov. Bryant said from Founders Square.

The Governor isn’t alone is pushing for school choice. On the national level, both the president and the GOP have called for more school choice options.

“We support options for learning, including home-schooling, career and technical education, private or parochial schools, magnet schools, charter schools, online learning, and early-college high schools,” the platform said. “We especially support the innovative financing mechanisms that make options available to all children: education savings accounts (ESAs), vouchers, and tuition tax credits. Empowering families to access the learning environments that will best help their children to realize their full potential is one of the greatest civil rights challenges of our time.

“A young person’s ability to succeed in school must be based on his or her God-given talent and motivation, not an address, ZIP code, or economic status.”

Similarly, President Donald Trump outlined his support for school choice on the campaign trail last year and has continued to make this a priority of his administration.

“I am calling upon members of both parties to pass an education bill that funds school choice for disadvantaged youth, including millions of African-American and Latino children,” President Trump said during his first address to a joint chamber of Congress. “These families should be free to choose the public, private, charter, magnet, religious or home school that is right for them.”