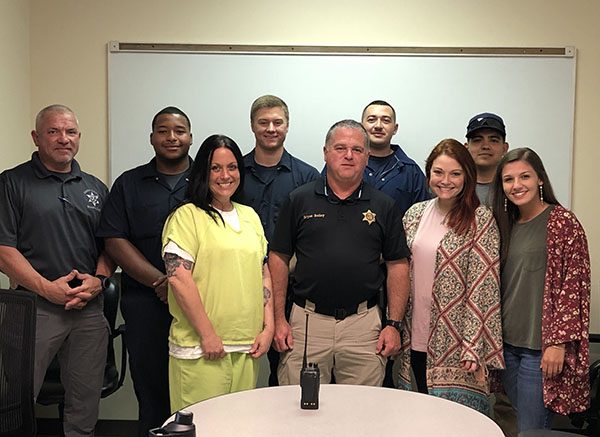 Rankin County Sheriff Bryan Bailey has adopted a new approach when it comes to corrections in his jail.  For many years Bailey, a narcotics agent, was on the streets arresting offenders.

“My mindset was lock ‘em up. Once I put them in jail, I didn’t care about them again until the trial came.  My mentality was to lock them up and then let’s go back out and see how many more we can get.  I wanted to get the thugs off the streets,” he said.

After being elected Sheriff and seeing the inmates inside his jail, Bailey recognized a need to help them.

“It started with a female inmate who was working in the office up here,” he said.  “I walked into the office one day and she was sitting there crying.  I asked what was wrong and she said she didn’t want to go back to Texas when she got out.”

This inmate was arrested in what Bailey called a “Road Kill” operation.

“She and her boyfriend were transporting drugs on the interstate when we busted them,” he said. “She was from El Paso, Texas and didn’t want to go back because she was in fear for kids and for herself.  She was tired of that lifestyle.”

It began with that one inmate who Bailey helped by getting her car back and locating a safe place for her to live while also helping her with furniture and a job.

“We helped her 100 percent when she got out and slowly began taking it away as she was able to do it on her own,” he said.  “God has opened doors even more and told me I wasn’t going to help just that one, but that I’d help even more.”

That’s what Bailey has continued to do over the years.

The Rankin County Sheriff’s Department stopped holding state inmates years ago because, Bailey said, they didn’t’ want the state telling them how to run the jail.

“We did away with all state inmates, so we started a Sheriff’s office trustee program.”

The Rankin County program is for nonviolent offenders who serve 1-5 years in the county jail and, at the end of the sentence, plead guilty to time served.

“That way they are kept out of the state system until the very end where they have to get on probation, but they do time here.  Some have to do more time than they would in the state system, but the trade-off is the many things offered here to help them get back on their feet plus they are in Rankin County which is usually closer to their families.”

In Mississippi there is a vast difference between jails and prisons.  Jails are usually located in each county and operated by the county sheriff while prisons are larger facilities spread out across the state and operated by the Mississippi Department of Corrections.  Jails are intended to house people for shorter periods of time, usually those sentenced for misdemeanor offenses who spend less than one year incarcerated.  Jails are also used to house people when they are arrested and detained before a trial. Prisons are intended to house people for longer periods of time, usually those who are convicted of felony offenses who will spend more than a year incarcerated.

About eight years ago, Bailey said he experienced a change of heart when a crew of female inmates was cleaning the county offices. That’s when the harsh reality of drug addiction struck him.

“We had 10 females on that crew, and 8 of the 10 had been sexually abused as children,” he said. “They were using drugs a way to cover up that physical hurt and self-medicate, and that broke my heart. I realized then that if we had therapy and treatment for them maybe it would keep some of them off of drugs.”

The Sheriff began by offering the Celebrate Recovery program for drug rehab in his jail.

“It’s offered to everyone, but it’s not mandatory,” he said.

However, if an inmate wants to get into the Trustee Program, it is strongly suggested that he or she participate in any classes that are offered.  Celebrate Recovery is a Christian-based rehab program that’s not only about drug and alcohol recovery but also about treating traumatic or psychological issues.

“The overall atmosphere of the jail began to change when we started putting back into these inmates,” said Bailey.  “It’s just amazing.  I still have some failures, but right now I’m guessing that I have about a 50 percent success rate with the ones who participate in the program.  That’s better than any recidivism rate I’ve seen yet. They key to it is that you can’t lock somebody up in this jail and then put them right back out without the tools to survive.”

The Trustee Program is a collaboration with the District Attorney, Rankin County Judges, and the Sheriff.

“We screen all the cases coming through,” said Bailey, “and what we are looking for is a first or second-time non-violent offender. We agree on the front end of a sentence from one to five years.  We don’t let anybody go over five years, and we won’t take anybody who is innocent. They have to admit to the crime. If they say they are innocent I want them to go up there and have a trial.”

The levels of the program are defined by colored jumpsuits.  Those who are admitted into the program begin with an entry-level position, an orange jumpsuit, picking up trash or washing dishes in the kitchen. The orange suits are constantly supervised by an officer.  From orange, inmates advance to red suits.  The red suits require slightly less supervision than the orange suits, and they are promoted to work in the laundry room or somewhere similar.  From red, an inmate has the opportunity to advance to the coveted blue suits.

“A blue suit is unrestricted,” said Bailey.  “You can go anywhere on this campus.  Once they get a blue suit status that is almost like being an employee here.”

Blue suits are also granted an eight-hour pass each Saturday to leave the jail and visit family.

“They work all day long and take class five nights a week,” said Bailey.  “Their day is full, and I want to reward them for what they do for us.”

Bailey said it is critical to inmate success that they have a safe place to live and are able to find a job in order to stand on their own two feet.
“Most of the ones who fail went back to the same old people and places and things that they should have stayed away from. The ones who succeeded stayed away,” he said.

A tell-tale sign that there is a problem with one of those who has completed the program and been released, according to Bailey, is if they quit communicating.

“The ones that come around and visit us and let us know how they are doing are clean and straight,” he said.  “The ones you don’t ever hear from are the ones you better watch out for because they avoid you for a reason.”

It’s disappointing for Bailey and the members of his department when an inmate returns to old ways.

“It broke my heart because he was probably one of the top five hardest working men I’d ever seen in my life,” Bailey said.  “When he’s off meth, he’s a talented, amazing person.  He was getting out of jail and he had a place to stay but didn’t have a job or a vehicle.”

The Sheriff’s mother had an old truck that Bailey gave to him.

“I told him to go ahead and take the truck and come back next week with proof of insurance on it and we’d sign over the title.”

Bailey was also able to find him a job.

“He was making $40/hr, and it wasn’t two weeks later he was back on meth,” said Bailey.  “He stopped calling me, and when he would call it was to borrow money for gas.  I said, ‘Wait a minute, you’re making $2,000/week, how can you not have any money?’ He went back home, and his family was his downfall.  His sister and kids were all on meth and they dragged him down. It was sad to see.”

While Bailey strives to see those who finish the program remain clean and sober, there are small victories that can be celebrated along the way.

“Just yesterday I got a phone call from a former trustee. He was out working a painting job and doing good,” said Bailey.  “He called me yesterday and said, ‘Sheriff, I messed up.’”

The Sheriff asked what had happened, and the man went on to explain that be was back on crystal meth.

“The huge thing about that to me was that he called me for help,” said Bailey.

Bailey said he has always told his trustees that if they get in trouble, they can call him before they get caught.

“I’ve told them to call me before they get caught and I can help them get into a rehab or get back on track, but don’t call me when the blue lights are on and you’ve gotten busted,” he said.  “It made me feel good that he called me, and I was able to get him in a 30-day rehab this morning.  It’s a trust thing.  If you fall off the wagon, let me lock you up and protect you until I can get you in rehab. I can get your charges expunged, but come on up and turn yourself in.”

Bailey said he is determined to see those who want better for their lives have the opportunity to achieve it.

“You’re either growing or you’re dying,” he said.  “We need to train these people and try to give them the tools to be successful. I’m amazed at the people in this jail who have never had a bank account.  That’s part of our curriculum now.  We offer financial classes to teach them how to handle their money.”

“There’s a big push right now for criminal justice reform, but I think the legislature needs to take a look at the ones who have succeeded,” said Bailey.  “They need to look at the ones who are standing on their own two feet and see what made them win.  It was giving them the education and equipping them with tools including a safe place to stay and a job.”

Bailey said it’s his mission in life to help each and every person who asks for it.

“I’ve got some who have realized they don’t want to go back to that life,” he said.  “They need a brand new life and I’m going to help them. This is criminal justice reform, but you have to have somebody who cares.”