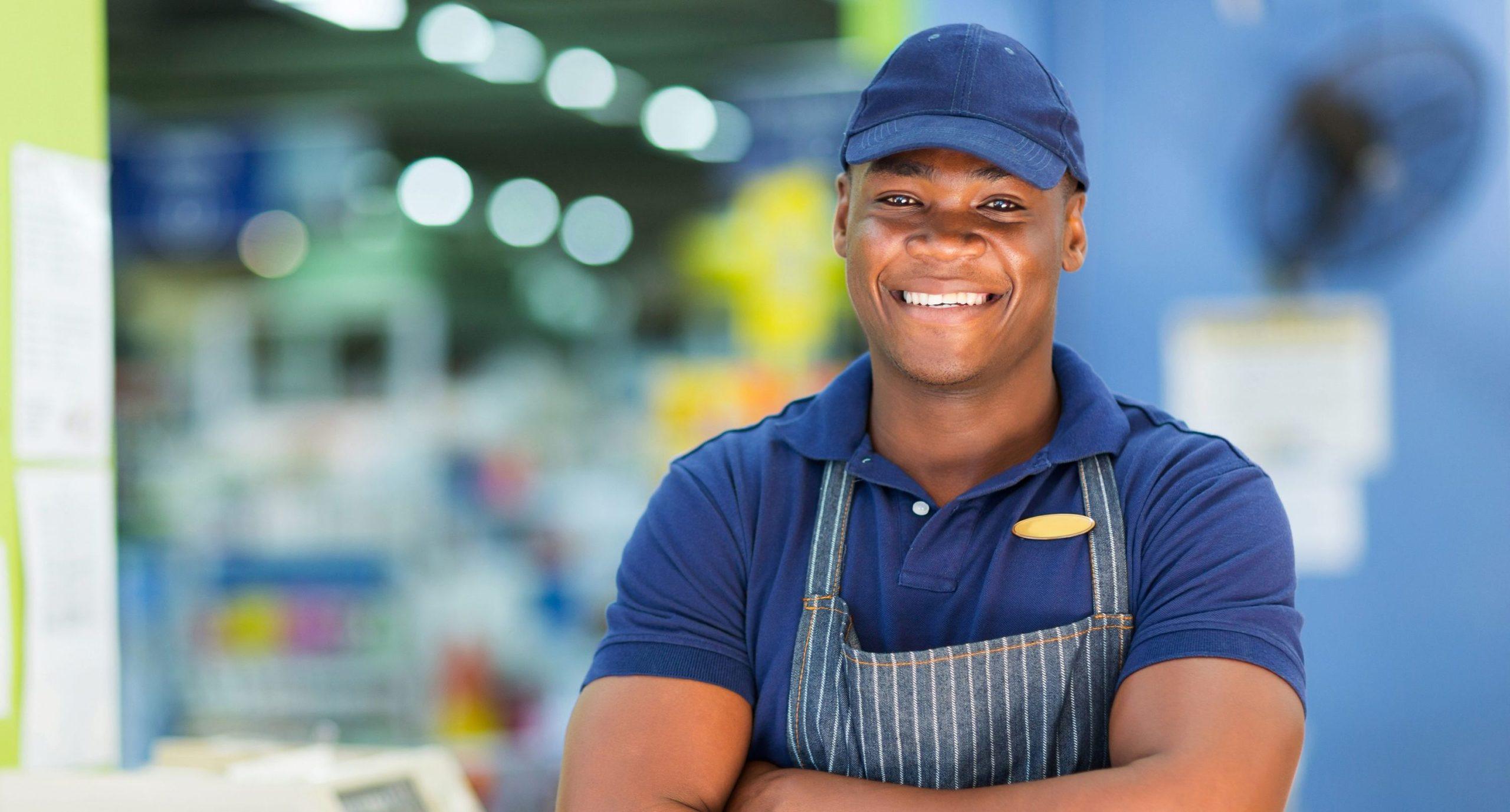 Empower Mississippi’s commitment to advancing economic opportunity is centered around two primary objectives. First, improvement to Mississippi’s labor force participation rate — the measure of how many Mississippians over the age of 16 have jobs or are looking jobs. Right now, Mississippi has the third lowest rate in the country. Second, improvement in income levels for Mississippi citizens and families.

In recent years, political leaders have contemplated eliminating Mississippi’s income tax as one way to generate the kind of economic growth needed to improve the job market. For this to be more than a conservative talking point, and something that has the potential of not only passing, but of positively impacting the lives of all Mississippians, it should be approached with thoughtfulness and willingness to learn from other states’ experience.

Part of that process involves determining what we can learn from other states that operate without an income tax. Presently, there are nine states that have no state income tax. Those states include Texas, Florida, Tennessee, Nevada, Washington, New Hampshire, Alaska, South Dakota and Wyoming. So how does Mississippi compare? Below, we examine a set of key performance indicators, including population growth, per capita income growth, real median household income growth, real GDP growth, and labor force participation rates. 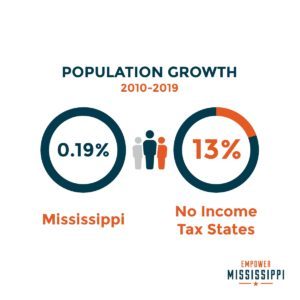 Between 2010 and 2019, Mississippi saw incomes increase by $8,012, good for a 25.93 percent gain. By comparison, the per capita income of citizens in states without income taxes grew by $15,210, good for a 36.5 percent growth rate. The largest increases have occurred in Washington ($22,082), Wyoming ($16,475) and New Hampshire ($16,717). Tennessee to our north has seen a $13,031 increase over this same time period. Notably, this particular measurement is not adjusted for inflation to account for changes in the cost of living. 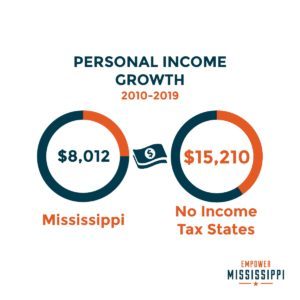 Where per capita income looks at income by individual, median household income looks at how the 50th percentile of all households in a state are doing. In this way, it contemplates multiple household incomes and changes in family structure. This measurement also is adjusted for inflation. In that way, it can provide insight into how significant increases are for families. Between 2010 and 2019, the real median household income for Mississippi decreased by 0.12 percent. By comparison, the nine states without income taxes experienced a 17.15 percent increase in median household incomes, with the four best performing states, including Tennessee to our north, experiencing growth over 20% and the worst performing state experiencing growth of 4.48 percent. 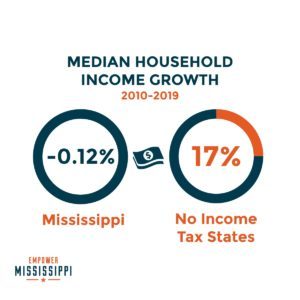 A state’s gross domestic product is a measure of all the economic activity in a state, including government spending. This measure is adjusted for inflation over the relevant time period. Between 2010 and 2019, Mississippi’s real gross domestic product grew at a rate of 2.6 percent. By contrast, the nine states without an income tax experienced real gross domestic product growth of 30.5 percent, with Texas, Florida, Washington and Tennessee leading the way. Alaska and Wyoming saw the greatest fluctuations over this period and were outliers, in part because of state revenue models disproportionately built on oil and gas exploration and decreasing demand and production in the industry. 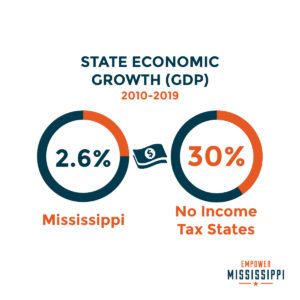 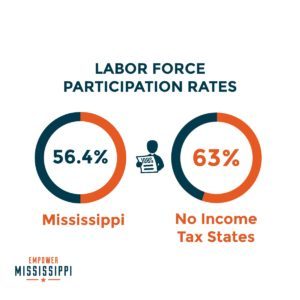 Note on Data Sources: All data discussed herein was pulled from the Saint Louis Federal Reserve’s economic data and research on states, which in turn comes from a variety of sources, including the U.S. Census Bureau, the Bureau of Labor Statistics, and the Bureau of Economic Analysis.

Note on Comparisons: The below data provides a series of proof points, but is not intended to be comprehensive or to replace more rigorous dynamic economic modeling. There are obvious distinctions between each of the states studied that should be considered by lawmakers contemplating the elimination of income taxes.