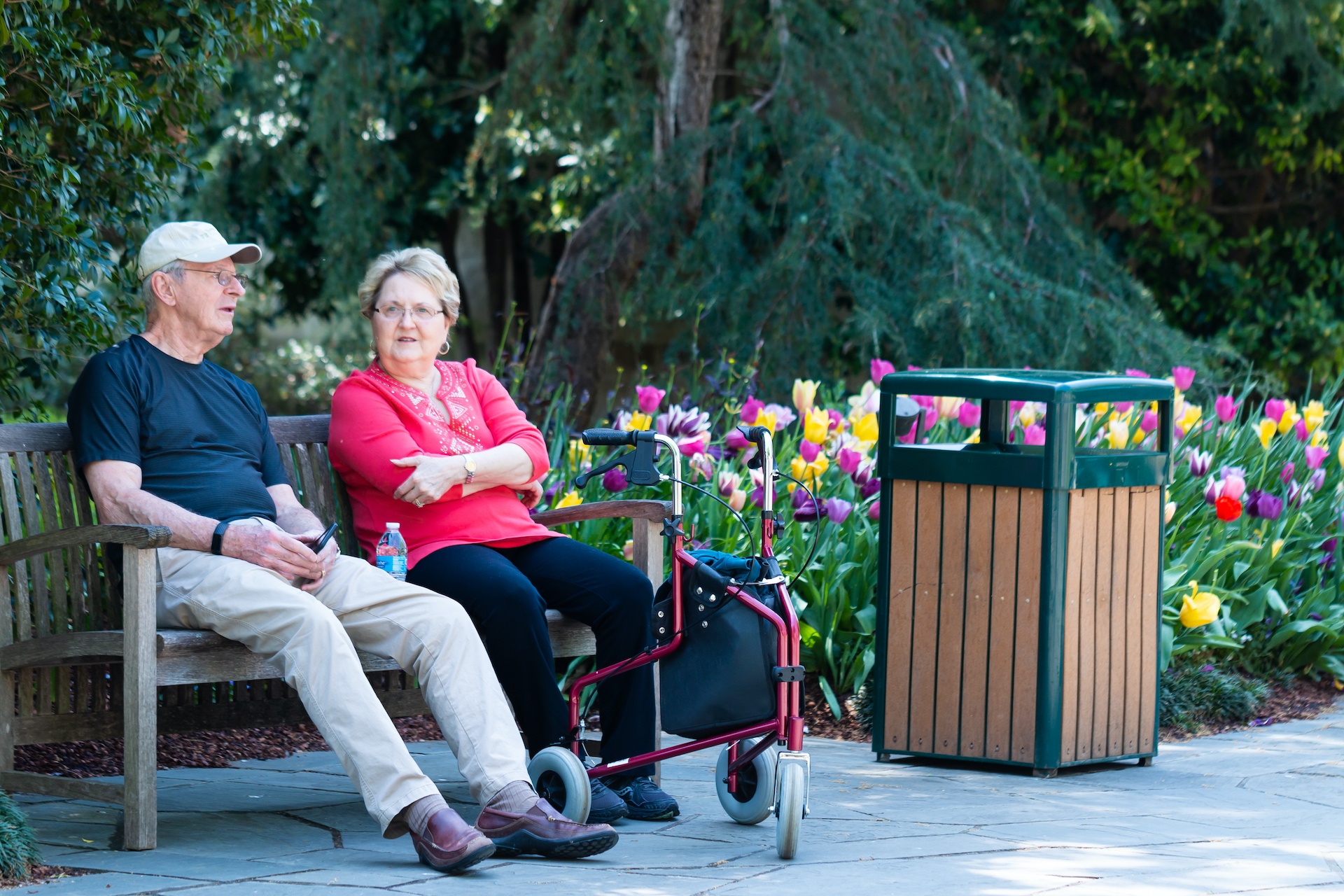 Mississippi routinely rates as one of the most friendly states for retirees for two primary reasons. First, Mississippi has the best cost of living in the nation, meaning people on fixed incomes can stretch their dollar further. Second, and important to this discussion, Mississippi’s tax system is advantageous for retirees.

Mississippi is one of twelve states that does not charge income taxes on retirement income, meaning people pay no state income taxes on social security benefits, IRAs, 401ks, or pension plans. Seniors who earn a salary or wage, or who have residual income from things like real estate, still pay state income taxes on those earnings. Mississippi also has a large homestead exemption for seniors, up to $7,500 on top of the existing exemption. This dramatically reduces what seniors pay in property taxes. Lastly, Mississippi does not charge sales taxes on medicine and medical care. This is particularly important for seniors since health care is the second-largest expenditure for this age group, on average, behind only housing.

Would Eliminating the Income Tax Ruin a Good Thing?

Last year, discussions began about expanding income tax elimination, beyond retirement income, to all workers and for all income in the state. In order to accomplish this objective quickly enough to ensure the economy receives the maximum benefit, and to ensure that we can maintain sufficient government revenue to fund core functions like education, the proposal included a partial offset of the tax cut with an increase in the sales tax rate.

The bill passed out of the House this session, HB 531, also includes a proposed offset, though at a much lower rate than last year’s bill. It would raise the general sales tax rate to 8.5 percent, a figure still lower than surrounding states. The end result is a larger net tax cut for Mississippians, with Mississippi workers getting a sizable “pay raise.”

But would this mean an increase in the amount seniors pay in taxes? Are they getting a raw deal if others get the same benefit currently applied to retirement income? For the overwhelming majority of seniors, the answer is that HB 531 would result in a net tax reduction, not an increase.

Income Tax Elimination on Non-Retirement Income. Many seniors survive on more than just retirement income. Some maintain part-time, or even full-time, jobs. Others have residual income from real estate or investments. The average senior household has income that falls outside of the retirement income category that is already tax free in Mississippi. They would get the benefit of the income tax elimination on this portion of their income.

Grocery Tax Reduction. HB 531, if fully implemented, would reduce the tax on groceries from 7 percent to 4 percent. After housing and health care, the third largest expenditure in most senior household budgets is groceries. Under HB 531, a retired couple spending $7,400 a year on groceries annually (the USDA’s moderate-cost meal plan for two seniors) would save approximately $222 in grocery taxes.

Car Tag Reduction. HB 531, if fully implemented, would reduce the ad valorem tax paid on car tags through a state credit by 50 percent. Tags on two vehicles which cost a combined $600 would be reduced by $300.

Sales Tax Increase. For most seniors, a 1.5 percentage point increase on the general sales taxes would not come close to eclipsing the savings associated with total income tax elimination and the grocery tax and car tag reduction. This is best demonstrated through a couple of examples: 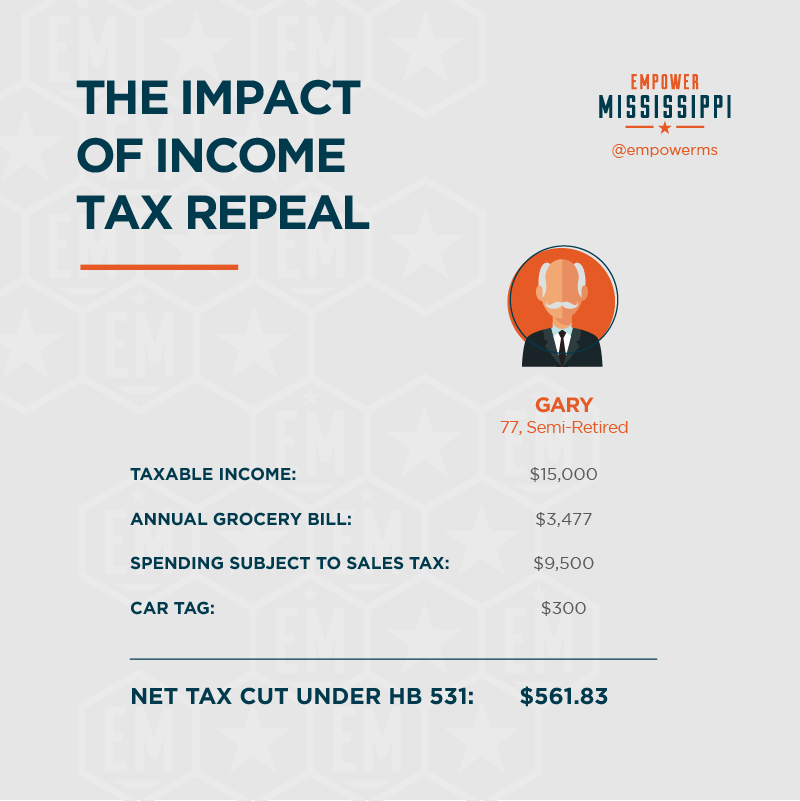 Meet Gary. Gary, 72, is a Mississippi resident. He is a widower who lives off of a wide array of retirement income that includes 401(k) retirement savings, Social Security, a part-time job, and a few rental properties. Gary’s side income and rental properties bring in $15,000 in taxable income, on which he pays $450.00 a year in income taxes. Gary buys $3,477.60 worth of groceries every year and pay $243.43 in sales taxes on those purchases. Like most seniors, Gary’s spending is more concentrated on health care and items that are not subject to sales taxes, but in addition to groceries, he still spends $9,500 a year on purchases subject to Mississippi’s 7 percent sales tax, good for $665 in taxes.  Gary pays $300 a year on a car tag.

If HB 531 passed and Mississippi’s income tax was eliminated, the grocery tax was cut to 4 percent, and a 50 percent credit were available for his car tags, Gary would be able to keep the $450 he currently pays in income taxes, would save $104.33 annually on sales tax paid on groceries, and $150 on his car tag. If to accomplish these changes, the sales tax rate was increased to 8.5 percent, Gary would pay an additional $142.50 in sales taxes.

In order for HB 531 to be neutral or result in a tax increase, Gary would have to increase spending subject to the general sales tax to $46,915.33 or more. 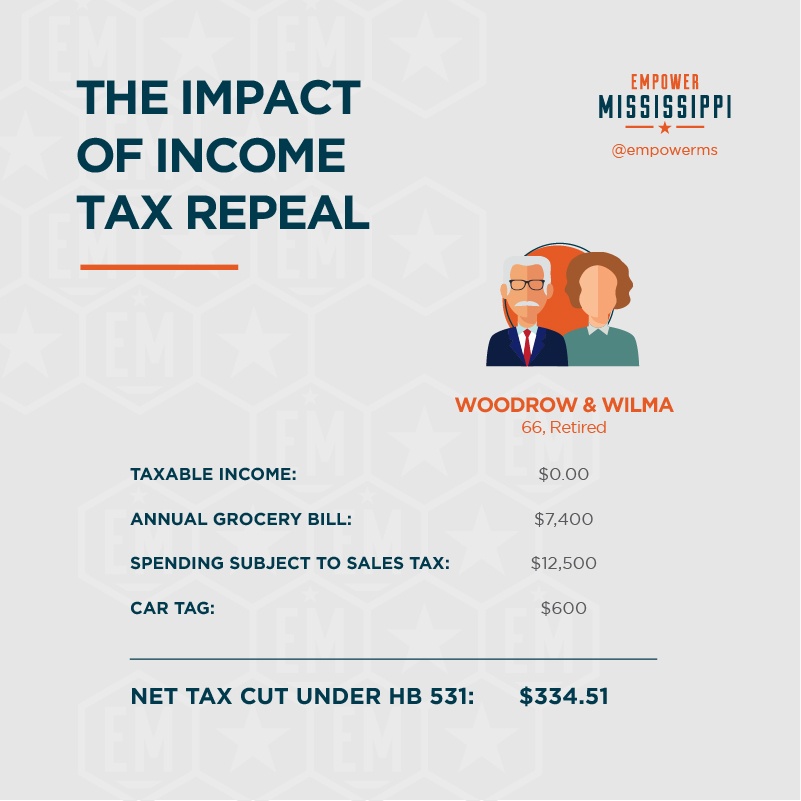 If HB 531 were passed and Mississippi’s income tax was eliminated the grocery tax were cut to 4 percent and a 50 percent credit were available for their car tags, Woodrow and Wilma would save $222.01 annually on sales tax paid on groceries, and $300 in savings on their car tags. If to accomplish these changes, the general sales tax rate was increased to 8.5 percent, they would pay an additional $187.50 in sales taxes.

The net tax reduction to Woodrow and Wilma would be $334.51.

In order for HB 531 to be neutral or result in a tax increase, the couple would have to increase spending subject to the general sales tax to $22,300.67 or more.