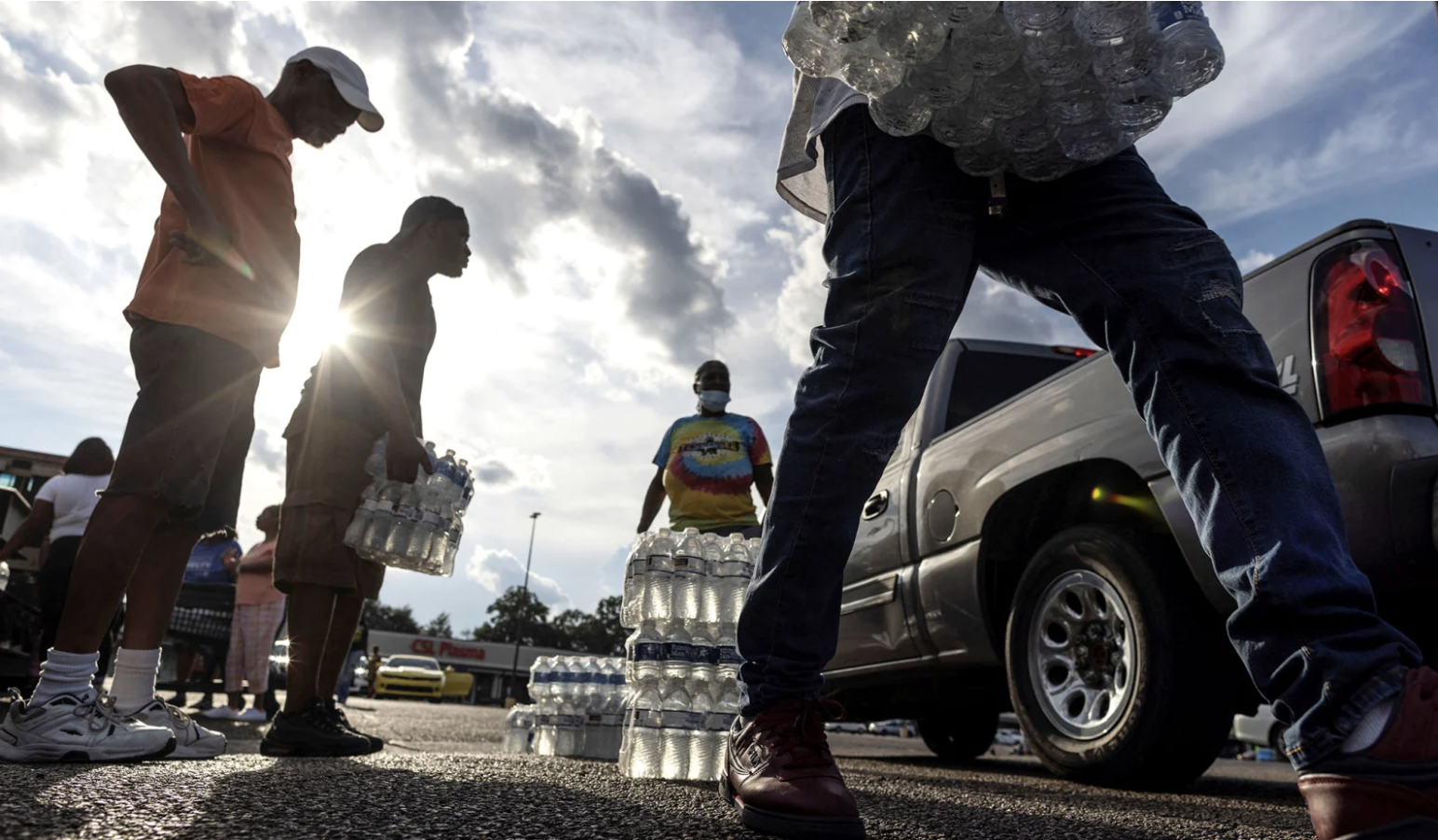 On August 29, 2005, Hurricane Katrina made landfall, ravaging the Mississippi Gulf Coast with record storm surge. On the 17th anniversary of one of the worst natural disasters in state history, Governor Tate Reeves stepped to a podium this week to announce another water-related disaster.

The governor’s message: The City of Jackson’s Public Water System (“PWS”) had failed, and residents would have inconsistent and unsafe water supply for the foreseeable future.

Though this crisis is only now gaining national attention, it has been brewing for years. As president of Empower Mississippi, a state-based policy organization, I’ve seen the slow lead-up to this inevitable collapse. Sensationalist media want to play to the lowest common denominator and pit people against each other, but this problem will require cooperation to solve. Mississippi leaders — state and local, Democrat and Republican, black and white — have an opportunity to work together and get Jackson’s water flowing again.

How the Water Shortage Happened

Mississippi’s capital city has been inundated with rain, swelling local reservoirs and rivers that serve as the raw water source for the Jackson PWS. The rapid influx of raw water strained Jackson’s water pumps, which, as of this week, are no longer producing enough gallons per day to maintain water pressure throughout the city and in surrounding areas.

This means that many of the Jackson roughly 160,000 residents are without water to accomplish first-world tasks that most Americans take for granted — from drinking to cooking, or showering to flushing a toilet. It also means that Jackson schools are closed and one of the state’s major economic hubs has ground to a halt.

Scratch deeper into the problem and one quickly realizes that Jackson’s water system was failing long before recent flooding occurred. A string of violations and consent orders from the Environmental Protection Agency, the Mississippi Department of Health (MSDH), and the Mississippi Department of Environmental Quality tell the tale of an operation relying on antiquated infrastructure, an insufficient number of qualified staff, and no clear plan to monitor and improve the system or to provide adequate safety notices to citizens.

A March 2020 EPA report revealed a history of non-compliance dating back to 2015, when lead levels began exceeding the acceptable range for three consecutive six-month periods. In February 2016, Mississippi health officials issued a compliance plan to Jackson PWS. The plan required Jackson to remediate a series of violations and come into compliance by 2019.

In January 2020, MSDH issued a violation for failure to adhere to the compliance plan. The March 2020 EPA report noted that Jackson had been forced to issue 750 boil-water notices to residents since 2016 and identified a litany of defects in the system, including uncalibrated monitoring systems for pollutants and fabrication of water samples, non-functioning raw-water screens dating back to 2017, UV systems used to disinfect water supply being offline for extended periods, no developed lead service line replacement plan, and too few Class-A water operators dating back to 2016.

The EPA issued additional non-compliance notices in May 2020 and April 2021, before, on July 1, 2021, entering a new consent order which required Jackson to produce both a comprehensive staffing and repair plan, along with consistent monitoring and reporting on the system.

The system has continued to be plagued with problems, with new boil-water notices being issued starting in June of this year and increasing pressure from the EPA to demonstrate compliance.

What It Will Cost to Fix It

One prevalent question throughout this process has been whether Jackson has the resources necessary to address this prolonged crisis. The city has contended that the fix is far beyond its means, but little evidence has been produced to demonstrate the actual costs of modernizing the system or whether it could be done in smaller tranches. What is evident is that there has been and are presently opportunities to contribute resources to start the process.

One source of funding frustration is the system for water-bill collections itself. For years, Jackson has been plagued with customers reporting that they either do not receive bills or that they receive astronomical bills unrelated to actual water usage. City officials acknowledge this problem and say it will not be fixed until 2024. One report last year estimated the city had over $100 million in unpaid water bills.

A previous attempt to modernize meters and billing through a contract with Siemens backfired and ended in a lawsuit. The suit was ultimately settled for approximately $90 million that could have been used toward deficiencies at Jackson PWS, but $30 million of the proceeds went to a Birmingham, Ala., law firm and most of the remaining funds were used to sure up outstanding bond debt.

The Mississippi legislature also allowed a referendum on a special one-cent sales-tax option to support Jackson infrastructure in 2014. The measure overwhelmingly passed and in the last fiscal year reported, the sales-tax option brought in $15 million in revenue over and above Jackson’s normal sales-tax diversion of nearly $29 million.

In addition to available local dollars, the Department of Finance and Administration (DFA) reports that between 2016 and 2021, over $200 million in state and federal money could have been used for water infrastructure through a series of loans and grants.

Included in this amount is $42 million received by Jackson in direct local aid from the American Rescue Plan Act. Hinds County, where Jackson is located, received another $45 million (not included in the DFA accounting). Using the state portion of ARPA funds, the legislature authorized a matching program for local infrastructure projects with applications beginning September 1. The pledging of Jackson’s and Hinds County’s ARPA funds for a match could yield $174 million almost immediately to start addressing its most-urgent water needs, though the city may have already pledged some of its funds to other projects.

State-Local Cooperation Is the Solution

The path forward is not without political hurdles. Elected officials who represent parts of the state other than Jackson may be reluctant to shower the capital city with funds in amounts that their own cities will not receive. Even among those that see the merit in the state intervening, there is skepticism about how well the funds would be spent and how decision-makers will be held accountable.

That skepticism is rooted in decades of mismanagement and flouting of past EPA and MSDH attempts to bring the system into compliance. It is further bolstered by consistent city-government dysfunction. A recent dispute between Jackson’s mayor and city council saw the attempted hiring of two different garbage-collection companies to run the same routes, and a series of political maneuvers resulted in a lawsuit pitting city leaders against one another.

Distrust on both sides of the discussion is compounded by Mississippi’s racial history and the political affiliations of the leaders involved. Jackson is a predominantly African-American city led by a predominantly Democratic power structure. Mississippi has a Republican supermajority in the legislature and all eight statewide elected officials are white Republicans. Mississippi’s racial history is complicated, tragic, and easily manipulated by opportunists.

Unfortunately, instead of trying to understand the facts associated with this crisis, including how we got here and the state’s history of trying to provide both expertise and financial support, some in the national media apparatus have seized upon this dynamic. Sensationalistic headlines at CNN, MSNBC, and USA Today all overtly assume that the current crisis is driven by racial animus. This approach might fire up echo chambers, but it does not solve problems, and ultimately is not in the interest of the people most hurt by this crisis.

To the credit of state leadership and city officials, they seem to understand this and be undeterred from finding a workable solution. Citizens should be equally focused on solutions instead of finger-pointing and deflection. One idea percolating is to create a regional utility district that is larger than Jackson. There is precedent for this in Mississippi, with the six coastal counties forming regional districts following Hurricane Katrina. While details matter and buy-in would be necessary, the proposed solution recognizes that the impact of safe water in Jackson extends beyond Jackson.

Whether Republican or Democrat, white or black, Jackson residents deserve better. Mississippi needs a strong capital city. Thoughtful use of ARPA funds and a state-city partnership can go a long way to fixing the problem. It can also serve as an opportunity to build trust and bridges.

This column appeared in National Review on September 2.