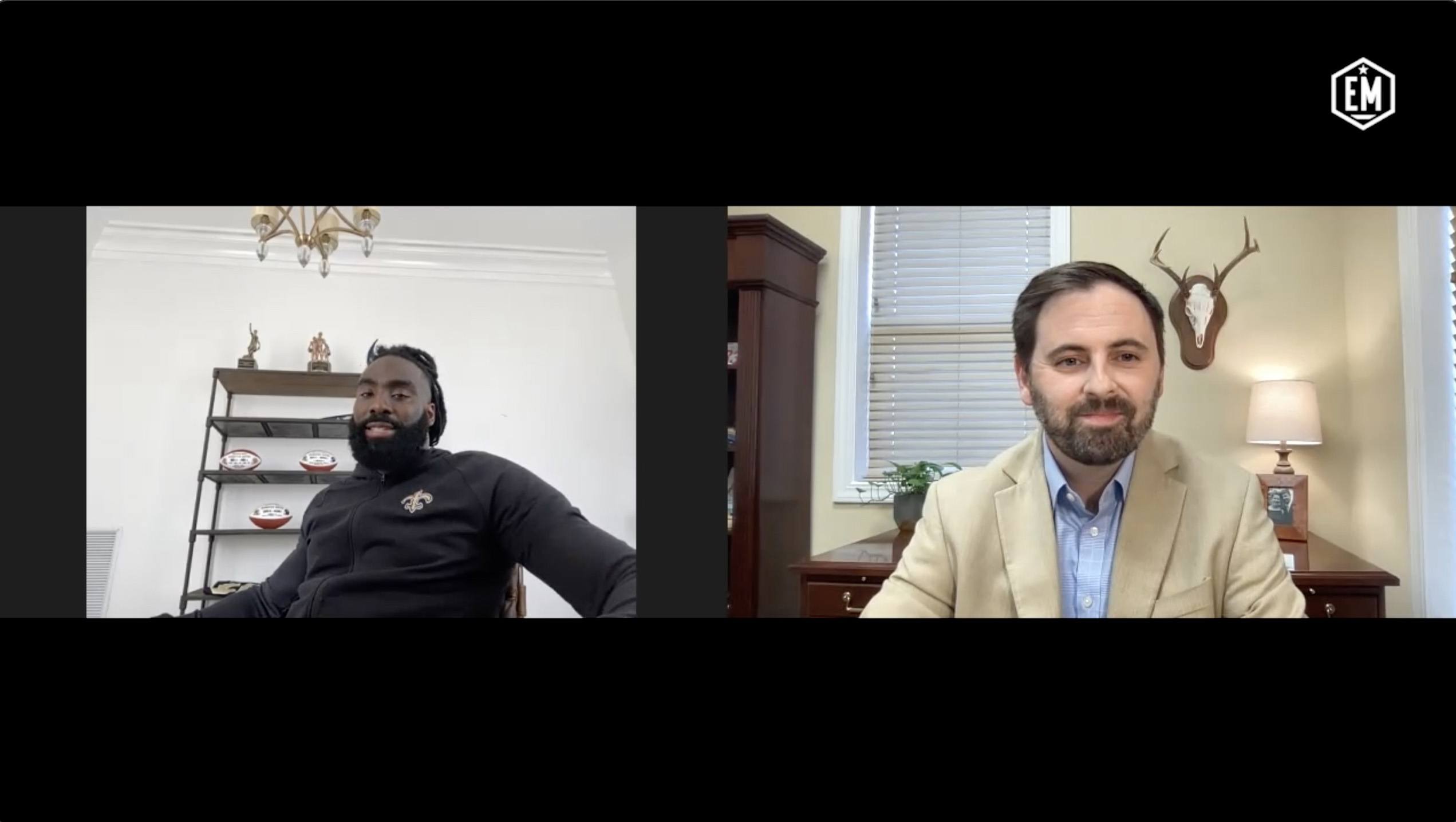 Say the name Demario Davis, and people rightfully think of one of the greatest athletes in the NFL. The New Orleans Saints linebacker is a leader on and off the field who has received countless awards including being named captain of his NFL team; the Saints’ nominee for the 2020 Walter Payton Man of the Year Award; and the Bart Starr Award which is given to one player in the NFL who best exemplifies outstanding character and leadership in the home, on the field, and in the community.

But something that may not be quite as widely known is Davis’ passion for criminal justice reform. The Brandon, Mississippi native has been outspoken on the topic and continues to shine a light on the need for reforms in his home state.

“Criminal justice reform should be important to us all,” said Davis. “It’s a function of our society and we as human beings should be concerned with what’s going on. I’m a big believer in you can tell a lot about a person by how they treat the least of these.”

Davis explained how everyone is one decision away from rising to the top of society or falling to the bottom.

“It can all change with one decision,” he said.

Born in the rural country town of Collins, Mississippi, into a single parent household, Davis and his mother moved an hour north to Brandon where he grew up.

“Living with a single mom and not having a lot of positive male role models to look to, I became more of a product of my environment and fell into a lot of things that exist in those communities – drugs, gangs, running the streets,” he said.

Davis’ activities eventually got him expelled from school. As a college freshman on a football scholarship at Arkansas State University, Davis was arrested for shoplifting. He went to jail for three days. Davis’ bond was set at $10,000 – a sum of money that he nor his mother could pay. His football coach bailed him out of jail at which time he vowed to turn his life around.

“That’s a major reason why I say one decision can take you to the top of society or to the bottom. Understanding how the criminal justice system works today that three days in jail could have been the difference in my life had I not been on a college football team. It’s been a journey by the grace of God and great people who poured into me in college,” he said. “They helped me grow in my faith and learning to live for God and for a mission that is bigger than myself. All that plays a part in why I do what I do.”

He is a staunch supporter of second chances.

“I got a couple of second chances,” he explained. “In high school when I got expelled from school, initially the principals wanted me to be expelled from my sophomore through senior year. That would have meant no more football and I wouldn’t be where I am today. I almost lost my life due to bad decisions. Going to jail after my coach had just given a speech the day before about not stealing. It was direct insubordination to him, and he didn’t have to let me back on the team and I could have lost my scholarship and never had a chance to play. From those standpoints I wouldn’t have been the NFL player that I am today.”

Thinking back to the three days he spent in jail, Davis recognized that he had the advantage of having a coach who cared about him and his future.

“Who knows how long I would have stayed in jail had I had to stay until my court date? We know due to the ineffectiveness of speedy trials I could have spent three to five months in jail. We know that affects human beings psychologically in a negative way. You’re spending time in jail when you haven’t been convicted of a crime yet. My life would have been different and that’s what people in jail are facing every day.”

Davis identified several solutions that would help with the incarceration crisis in the state.

“We need to look at it when a crime happens and ask if this is something that needs to be punished with jail time. If it’s a non-violent offense or if it’s a first-time offender, let’s look at the situation and understand on the front end that there are other ways that we can build this person up and make sure that this doesn’t happen again. That’s ultimately the goal is to prevent this from happening again.”

By redirecting offenders to programs that can treat underlying issues, Davis believes that it produces better outcomes for everyone involved. He noted that looking at each person’s circumstance and coming up with ways to help get them on the right path is much more productive.

Using prisons as a warehouse for people is inhumane, he emphasized.

“We need to make sure we aren’t putting everyone inside the jail system,” he said. “We don’t need to fill beds up with bodies because it’s psychologically damaging to people who don’t need that environment to change. We need to figure out ways to steward our tax dollars properly.

“You have to give the people inside jails something to live for other than just surviving. If you give them something to live for – education opportunities, job training – that’s going to give them means to stay out of trouble, want to get out, and know they have a job on the other side. We need to provide avenues for people leaving the system to reintegrate into society.”

While Mississippi has the second highest incarceration rate in the country, Davis stressed the need for reforms nationwide.

“The First Step Act was just that – the first step in the right direction. The overarching question is how do we get less people behind bars? You have to figure out what plays a part in that. We’re sentencing people who don’t need to be sentenced to time. We’re sentencing people too long for offenses. And we’re holding people too long that could be out,” he noted. “You’re cramming people into these spaces and it’s overcrowded. Mississippi is shining a light on an issue that’s happening all over our country. This crisis is going on everywhere. The change needs to happen expeditiously. We don’t have time to wait because those statistics are people. Those aren’t numbers. Those are people. Every time a number is added to that count it’s someone’s father, husband, wife. It’s somebody to somebody. That’s how we need to be thinking about change. It needs to happen expeditiously.”